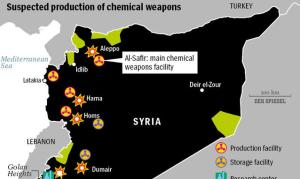 Unfortunately it has become clear to everyone that, despite its commitment to dismantle its chemical weapons arsenal, the dictator Assad continued to use these weapons very dangerous and destructive power against his own people.

Chemical weapons in possession of Assad are primarily gases, such as sarin gas and mustard gas that cause devastating affects on the body of those who come in contact with these substances. The Syrian American Medical Society released a report in which it underlines that throughout the Syrian territory chemical weapons were used against civilians at least 161 times and this resulted in at least 1500 victims and ben 14500 wounded, including many children.

In Syrian cities still besieged the situation is increasingly problematic and humanitarian aid cannot reach the most remote areas; the local population is forced to feed on what it finds on the street and sanitation conditions are disastrous. Playing in the street children come into contact with the chemicals remaining after the Syrian army attacks without knowing and they are poisoning, even without being directly exposed to hazardous gases. Children are always the most affected by war, if you think that more than 80% of the child population was directly involved in the conflict and that the age of the children recruited as soldiers has drastically lowered; also the number of children not receiving a suitable education is in dramatic growth.

Strongly suspect that Assad continue in secret locations to produce chemical weapons became a certainty, we can guess this because, even after the alleged dismantling of the chemical arsenal, attacks with unconventional weapons have increased instead of decreasing as it would have been more logical.

Today, Russian President Putin announced the phased withdrawal of Russian troops from Syria to facilitate the new peace meetings planned in Geneva and it is hoped that the crisis could be resolved soon without further bloodshed.