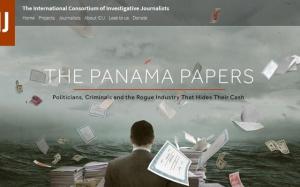 Panama Papers scandal shows powerfully in vogue the theme of finance out of control, able to cause massive distortions of normal market trends. When the financial markets are out of control you create those systems, like that of the law firm of Panama that kicked off the scandal, where huge capital are concealed to the traditional control and tax system and end up in tax havens without rules.
Panamanian scandal was unearthed by a deep throat who advised an international consortium of reporters about what happened every day before his eyes: huge amounts of money, very often illegal, were deposited in Panamanian complacent banks.
Scrolling down the list of the owners of bank accounts in banks accused of cleaning up dirty money, there are the names of international terrorists, unscrupulous warlords and drug traffickers involved in all sorts of illicit affair. According to the Government of the United States would be in the infamous list 33 between individuals and companies already blacklisted for clear complicity with the heads of the most famous and lethal terrorist organizations.
More than 11 million are the secret files unearthed by computer firm Mossack Fonseca and the huge amount of documents once reserved you also read the names of some of the largest banks in the world, including the most important Russian financial institution closely linked to the narrow circle of Russian oligarchs closest to President Putin.
Very often were created offshore companies that do nothing if not manage funds of dubious origin and in some cases boil down to a post office box in which to pass the compromising documents.
According to some humanitarian organizations such as Transparency International and Oxfam, illegal money laundered in banks and bogus companies in tax havens deprives every year many funds that could be spent on helping the poor and less fortunate people.