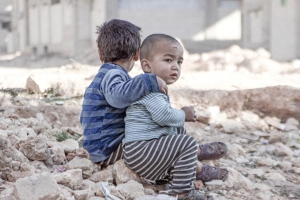 In Aleppo, despite the ceasefire signed on 27 February, clashes continue and in a raid made together by Syrian and Russian Aviation has been hit a hospital run by the humanitarian organization “Medicins sans frontieres“. Within the hospital there were many small Syrians waiting to be visited by a doctor with their parents, the hospital was the last one really in operation in the city once known for its Syrian SOAP.
The confirmed dead so far are 30 and many probably among them is also the last pediatrician still on duty in the area, a great doctor who did not want to abandon his tiny patients even in the darkest moments of the war, because he knew that children are the future of Syria and didn’t want to leave them alone to face all the horrors and sufferings of the bloody battles against the self-styled Islamic State.
From today for children in Aleppo and their families, who are already struggling with the fear of terrorism and with the lack of all kinds of necessities, there is a new big problem: without a pediatrician all Syrian city kids have lost the right tocure suitable for their age, not to mention that it’s also lacking a benchmark , someone to blow off steam and confide their fears in front of a war too large and hard to understand for the smallest and defenseless.
The childhood of all these children has now been completely destroyed by the fighting still raging in the city; many were maimed, many have lost their parents and loved ones, everyone is and will forever be traumatized because of the violence they are subjected to every day.
The international community has condemned the raid and meanwhile continue high-level peace talks: hopefully soon see a smile in the mouths of these children.
Pubblicità

Una risposta a "No pediatrician for children of Aleppo"