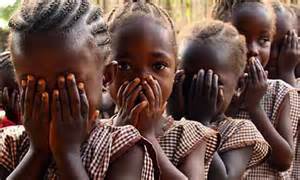 In many countries, especially in Africa, is still much too use the practice of female circumcision; the terrible female genital mutilation causes enormous damage to the body of little girls and during childbirth problems are amplified even more. Are still many, many little girls who are subjected to this horrific practice and remain for a lifetime with the terrible memories of that moment and with serious damage to their body; in severe cases this practice can cause complications that may lead to developmental and learning delays and there are many young girls who lose their lives each year for bleeding.
Today, the Egyptian Government announced that it will take new and stricter legal measures against those who make female genital mutilation: in the new law there are penalties of up to 7 years in prison. In Egypt the practice of infibulation is still very widespread, especially in rural areas, despite being banned since 2008, and yet so many families put their daughters in this veritable torture, which is also practiced by improvised doctors.
Somalia, Guinea and Djibouti, along with Gambia, Mauritania and Egypt and Indonesia are the countries where female genital mutilation is most prevalent and according to Unicef 44 million of girls were subjected to these inhuman practices, even very young.
A little girl said she had to undergone female circumcision at the age of 8 years and she had been in bed for days with excruciating pain. Some gynecologists explained to women all risks that an infibulated woman runs during childbirth: when the child is in the birth canal , the canal is blocked and sometimes he or she might be born already dead, while the other cases he or she needs a long  resuscitation, involving very serious  physical and cerebral damages.
Female genital mutilation is condemned and globally, but it still talks too little to discourage these horrible practices.