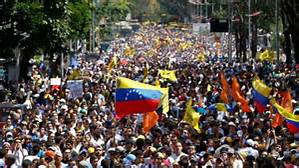 The situation in Venezuela has become unsustainable and chaos reigns everywhere: strikes and demonstrations against President Maduro follow each other relentlessly for days and those who have taken to the streets do not have the slightest intention of giving up. There are now thousands of people with big banners and chanting slogans against the Government are demanding that a referendum be held as soon as possible to formalize the end of Government Maduro; the only way forward is a change of Government.

The Venezuelan capital Caracas is one of the most dangerous cities in the world and holds the sad record for crime and homicides; poverty and unemployment are soaring in all in Venezuela and the collapse in oil prices in recent years has done nothing but exacerbate many existing problems. Maduro‘s Government had set itself the goal to help the lower classes and to bring order, legality and safety in many of the most degraded city’s suburbs, beginning with the capital, but his plan failed, and entire neighborhoods of Caracas are in the hands of the Lords of the trafficking of arms and drugs, while the crime rate has had a real surge.

In all the Country there is a terrible lack of the basic necessities such as food and medicines and people are forced to make long lines to buy even just bread and water; many people flock to the border with Colombia pending open and be able to buy the necessities in Colombians stores. The Venezuelan economy aimed everything on oil and has not been able to diversify, so when the price of crude oil has collapsed, the entire economic system has entered a deep crisis which has reduced thousands of people to starvation.

Without a stable Government on Venezuela threatens the civil war or military coup and this must be absolutely avoided.