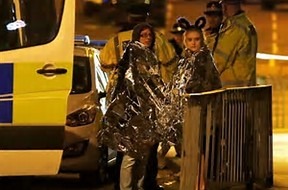 There are no words to describe with how much cruelty and brutality the suicide bomber of Manchester has taken away from the lives of young girls who were living the dream of participating in the concert of their idol Ariana Grande.
A craft bomb, but at the same time sophisticated enough, filled with nails and other metal objects with the sole purpose of inflicting the victims as much pain as possible, exploded at the Manchester Arena immediately after the end of the concert. Twenty-two young lives full of dreams and plans for the future have been broken forever, and one cannot even attempt to imagine the pain of relatives, friends and family so it is immense and inconsolable.
The girls who lost their lives were the daughters, the sisters, the friends of all of us who each time are shocked by the hatred and violence with which the Islamist terrorists strike innocent people, who have the sole fault of having fun.
The only thing we can do is pray for them and also for the survivors who will never forget such a great trauma. At the same time we must not renounce to live our lives as always, because closing in the house means surrendering to terrorism and this would be like justifying the assassination of those twenty-two innocent girls.
After a concert you should go out without a voice, but never without life.