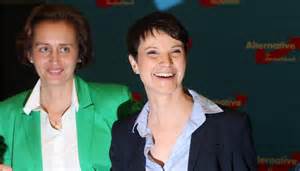 After the elections in Mecklenburg-Western Pomerania the leader of  the extreme-right German party Frauke Petri smiles happy and has all the reasons: the party has passed the political education of Angela Merkel and has managed to establish itself as a new political force in the country. With more than 21% of the vote the party Alternative for Germany has proven to be able to communicate properly its political project to the electorate that has rewarded like never before.

The political education guided by Petri has ideas typical of an extreme right-wing party: no to uncontrolled and too massive immigration, no to the European Union and the single currency and recovery of true German national traditions. No one among political analysts would have thought that a small extreme right-wing party born only three years ago and with various disputes within it could one day win the German political scene, instead so evident at the end of the poll Frauke Petri has managed to overcome the powerful party of Chancellor Merkel, in the same region where she was born and began her political career.

In Europe there is more and more disinterest in the community project, and in many cases there is also a lot of impatience for decisions that come from above, from the Community institutions perceived as distant and unable to deal with everyday problems of European citizens. After the surprising victory of Brexit, also in other EU Member Countries have strengthened and outspoken political forces are showing more and more consensus: poor management of migratory crisis and the danger of international terrorism have lost confidence in the European project and encouraged those parties that propose a return to nationalism and end the transfer of sovereignty in favour of Brussels.

It starts talking about referendum on Europe and the euro even in the Netherlands, in Austria and in some Northern and Eastern Countries of Europe, and the far-right parties become stronger and gain consensus: this is the dreaded domino effect that could also lead to the end of the European Union itself?