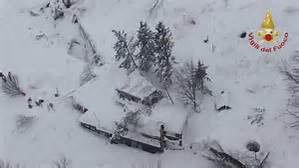 An avalanche struck the Hotel Rigopiano in Farindola, a small town perched on the Gran Sasso in Abruzzo. Unfortunately the hotel has gone completely destroyed and the force of the avalanche he uprooted from the ground up and moved at least 11 meters.
Inside the hotel at the time of posting of avalanche there were at least thirty people including four dead have been recovered and the other does not have traces. Rescue workers, arrived at the disaster site after a long and exhausting skiing gear under a Blizzard, you are immediately activated to find people overwhelmed by a sea of snow and debris and began to call out the name of the missing but until now there has been no response, only silence and destruction.
All our thoughts and prayers at this difficult time should be directed to the peoples of Central Italy who live cramped in a vise between earthquakes and bad weather which is creating hardships upon hardships.
Who can help this tenacious people who did not want to surrender and abandon his land, anyone who wants to help the animals that are heavily affected by extreme weather conditions, do it without hesitating because at this time there is a need for solidarity and not controversy.
A round of applause to the splendid work of all the rescue workers who have no qualms about endangering their lives to save others.
Valeria Fraquelli founder and administrator of the site