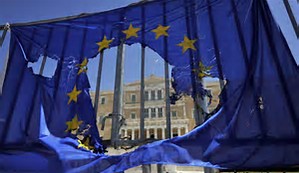 While the Brexit is becoming a reality, even in Greece you are rekindling the debate whether to stay in the eurozone or abandon forever the community project. The Greece, crushed under the weight of seven uninterrupted years of austerity imposed by the Community authorities to cope with the huge Greek government debt, are seriously thinking that maybe it would be better to leave the European Union and resume the reins of economic and monetary policy.
Certainly the return to the Drachma would be neither easy nor painless for the Greek people, but many now think that a return to national currencies is still better than staying in the eurozone and continue to suffer the punitive policies imposed by Brussels that have left many Greek citizens in poverty and unable to withdraw their savings from banks because cash limits agreed by the Greek Government with the Community institutions.
In other European countries now the disaffection towards the European project “unprecedented spikes touched before; Eurosceptic political parties and movements are born in almost all Member States and conquered several consensuses among citizens. In France the Front National of Marine Le Pen promised in case of victory at upcoming presidential elections a referendum similar to the British one and the same did the party for freedom of Geert Wilders in the Netherlands, the League in Italy and many other countries.
Austerity instead of raising the community economy has achieved the opposite effect and reception policies, coupled with the threat of terrorism, rather than stimulate solidarity have created a climate of hatred and distrust towards refugees, and some countries have erected walls and barriers to prevent migrants to transit through their territory.
The prevailing euro-scepticism, the immigration crisis and the danger of international terrorism are fueling nationalist sentiments that are likely soon to create a domino effect that could lead to the end of the European Union.
Pubblicità