Fear in London this morning: at 8:20 local time an explosion in a subway wagon, the mythical tube, has created panic among travelers who every day use the train to go to work or study. The whole city has fallen into the nightmare of terrorism that has already hit the British capital, causing deaths and injuries.
Scotland Yard immediately started the investigation to understand what really happened and from the first rumors it seems that a container was exploded in a subway wagon; For now all the tracks remain open and it is not yet known whether it was an accident or a terrorist act. It seems that the bomb are defusing another device left unexploded but there is still no confirmation; If this news was confirmed the hypothesis of terrorism would become the most accredited.  “A fireball has wrapped the subway carriage,” said a witness. “I heard screams and people fleeing to Parsons Green station,” said another passenger as he ran away terrified.
For now the only thing certain is that some travelers have been medicated with burns wounds especially to the face and legs. 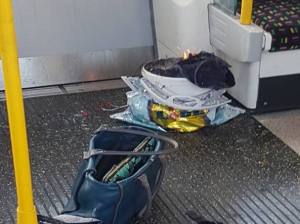 This is the first image of the container that would explode in the London Underground in the Parsons Green station area.
To stay up to date I recommend the following link: https://www.theguardian.com/uk-news/live/2017/sep/15/parsons-green-tube-explosion-closes-london-district-line-live-updates